Jim Fletcher Posted on March 21, 2017 Posted in Conventional Quiet Title, Quia Timet Against All the World

April 8, 2014. For file use anytime. Photo of the Georgia State Capitol taken from in front of the Sloppy Floyd Building April 8, 2014. BRANT SANDERLIN /BSANDERLIN@AJC.COM . 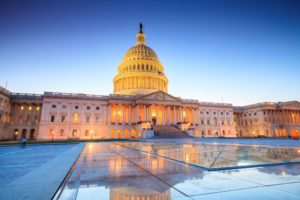 In the case of TDGA LLC v CBIRA, LLC, 298 Ga. 510, 512 (2016), the Georgia Supreme Court held that “the State and its agencies are immune from suit under OCGA § 23–3–40” which is the conventional quiet title procedure.  However, in its next breath, the Court held that “an in rem quiet title action is not subject to sovereign immunity.” Id.

In the 2015-2016 Georgia General Assembly, House Bill 59 was passed to amend OCGA 36-33-1 and 50-21-50 and add section 23-3-45 to remedy this decision, so that conventional quiet title actions could be brought against the State and its agencies.  However, the bill was vetoed by the governor.

It remains to be seen if the General Assembly will attempt again to provider a waiver of sovereign immunity for conventional quiet title actions.